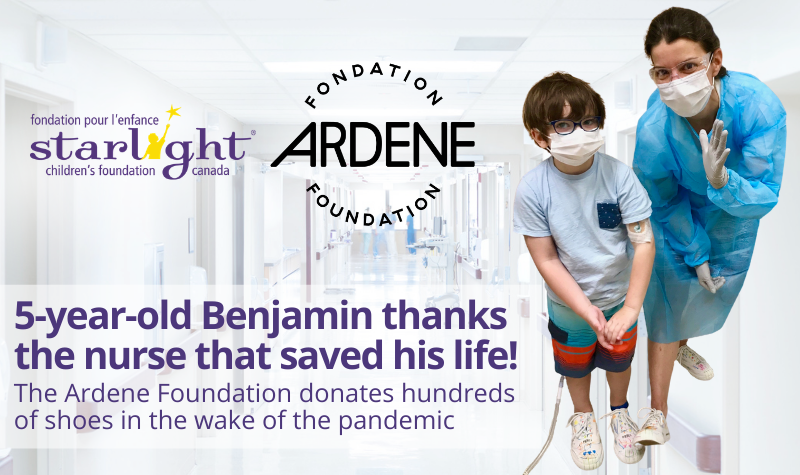 5-year-old Benjamin thanks the nurse that saved his life

Among the hundreds of kids and teens that gifted personalized shoes to thank frontline workers, was 5-year-old Benjamin. In the wake of the pandemic, the Ardene Foundation partnered up with Starlight Children’s Foundation Canada to send seriously ill children across the country 2 pairs of shoes with provided fabric markers. After drawing on them at home, they would keep one pair for themselves, and give the matching pair to an important healthcare provider of their own.

We asked families to describe their chosen healthcare worker in a few words. Today, we introduce you to 5-year-old Benjamin and his “ray of sunshine” healthcare hero, France! 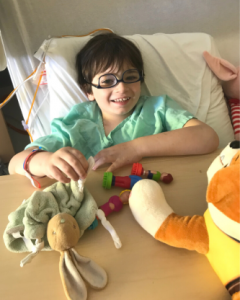 Benjamin is one of 70 people worldwide who suffers from an extremely rare mitochondrial disease, named FBXL4. Mainly attacking his digestive system, this 5-year-old cannot eat regularly and needs to receive all his nutrition through intravenous (IV) therapy 24 hours a day. As Benjamin is vulnerable to infections, it makes it difficult for him to go to daycare or have friends.

Unfortunately, being in-hospital has been a large part of Benjamin’s childhood. He is often hospitalized and needs to go in at least once a week for dressing changes for his IV and to receive treatment. Over the years, Benjamin has met many caring doctors and nurses who have all played an important role in his health journey.

One of these healthcare heroes that Benjamin and his family will never forget is France. France is a clinical nurse specialist at the McGill University Health Centre and helps takes care of Benjamin at Montreal Children’s Hospital.

“France is for us a pearl, an angel from heaven,” Benjamin’s mom, Stéphanie, shared. “We have had the honour of knowing France for a few years now. But since last April, she has saved Benjamin’s life thanks to her expertise and the accuracy of her work.”

Benjamin has had repeated infections which meant he was no longer able to insert his necessary central lines. “Without this line, Benjamin cannot be fed, which gave little hope for survival,” Stéphanie said. “Then France appeared with new ideas.”

With her specific expertise and a new type of catheter from Toronto, France assisted in a revolutionary insertion technique that saved Benjamin’s life.

Thanks to the Ardene Foundation, Benjamin and his family were able to gift France a small token of their appreciation with hand-drawn shoes, customized just for her. Taking extra care in designing the shoes, Benjamin wanted to show his thanks for France coming to his rescue in such a difficult time in their life, and for continuing to support them ever since. 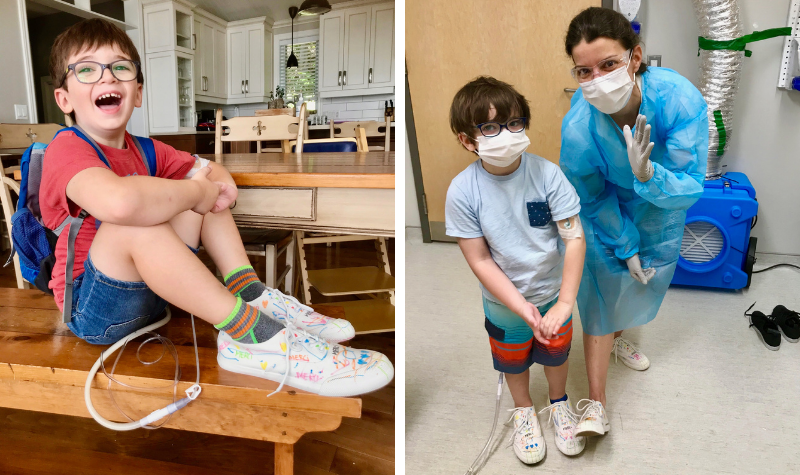 “We love her deeply and that’s why we chose her for the shoes,” Benjamin said. “She wears them every day now for work!”

A special thank you to the Ardene Foundation for giving hundreds of families like Benjamin’s, and healthcare providers like France, a moment they will hold close in their hearts forever. While this campaign may be coming to an end, children and healthcare workers will always have their shoes to remind them of their stories together. From the Starlight staff, Starlight families, and healthcare heroes across the country, thank you for your generosity.