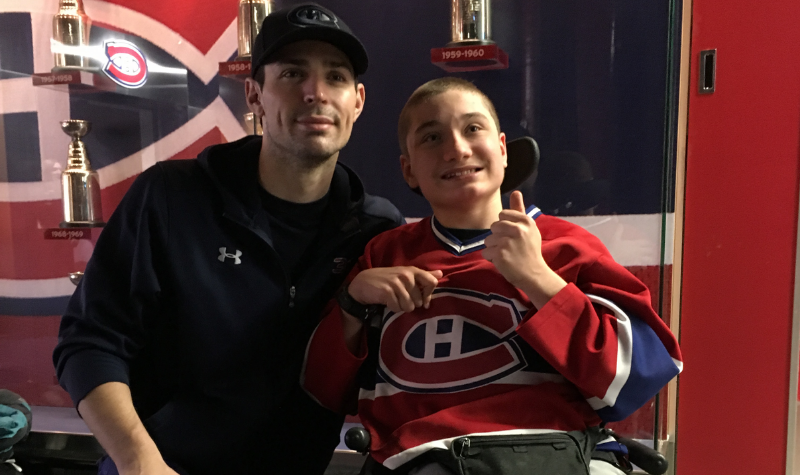 Meet Thomas, a teenager who lives with cerebral palsy. He loves hockey, though being a wheelchair user he understands he will never get the chance to play the sport in its original form. He can however play a modified form, sled hockey, which he participates in at school.

Being from Quebec, naturally the Canadiens are Thomas’ favourite hockey team, and goaltender Carey Price is a hero for Thomas. Having already received tickets from Starlight to a Canadiens game late in December, we were thrilled to also be able to arrange a meet and greet afterwards between Thomas and his goaltender hero.

After taking the time to answer all of Thomas’ questions, chat with him and his family, and show them his helmet, Price posed for some photos which will no doubt be cherished by Thomas and his family forever.

“Meeting my hero made me feel like I had superpowers of my own,” Thomas said once the night was over. “It made me realize anything is possible.”

Contacted by the media after, Carey Price said that “it’s not an obligation, but an honour to be able to meet these kids and put a smile on their faces.”

We are so pleased Thomas had this dream come true, and thank Carey Price for helping to promote a fair and equal world for all hockey players, in whichever form of the game it takes!

To help more sick kids like Thomas live out a dream of their own, donate today.